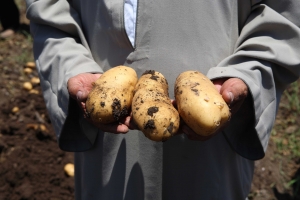 In 1956 Dutch entrepreneur Arie de Nijs founded De Nijs Trading Company in Warmenhuizen, which is located in the northwest province Noord-Holland. The company, which initially exclusively consisted of the founder, set itself to trade of fruit and vegetables in Holland and some surrounding countries, especially Holland and Belgium. Years later, after Arie’s two sons joined the company, the rather general mindset of the company turned in to a more specialized trade of seed potatoes; a specialization which to this day continues to define De Nijs’s identity.

In the mid-1990s, Michel de Nijs, grandson of the founder, was appointed Managing Director, an event which meant a considerable step in De Nijs’ change of course towards a worldwide operating trading company. The main focus of export moved from the surrounding countries to the global market, with a growing emphasis on Northern Africa and the Middle East. Today the warmer regions of Northern Africa and the Middle East account for more than 50% of the turnover, a percentage that continues to grow year over year!

In the following years De Nijs claimed an ever more important role in international potato trading and became a significant party which is to be taken into account in several respects. Ever since in 1997 the focus moved to export, the companies trading volume has doubled. Currently 95% of the turnover is achieved by 40 to 50 potato varieties, including well-known cultivars such as Spunta and Desiree. This widely developing trading network and rate of growth could not have been sustained without support from a parallel network of cultivation locations (pool contracts) throughout the whole country, which is essential in our ability to guarantee a consistent and reliable product offering.

As well as seed potatoes, De Nijs’s trading activities also focus on import and export of table potatoes. Furthermore, De Nijs is exploring other markets, such as export of fruits and vegetables and frozen French fries. Nevertheless, the main purpose of De Nijs is to maintain its prominent position in national and international trade of seed potatoes. It doesn’t need any further explanation that this is the area of expertise in which De Nijs has excelled over more than half a century. De Nijs gladly shares its experience, knowledge and insights – via excellent parent material – with other potato growers in multiple countries.